This project was supported, in part, by 4Culture/King County Lodging Tax. 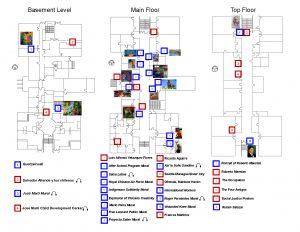 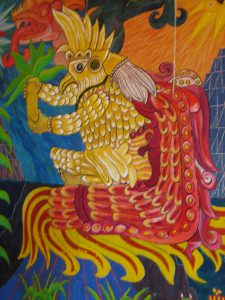 This mural depicts one of the most revered deities of ancient Mexico: Quetzalcoatl. The name Quetzalcoatl comes from the Nauatl word quetzal, a bird with beautiful feathers, and coatl, which means snake. Quetzalcoatl is the creator of human life and was said to have endowed humans with many gifts. One of these was that of arts and crafts, which makes this deity a favorite among artists. Quetzalcoatl also gave humans the gift of agriculture and so here Quetzalcoatl is placed near a corn plant. The corn plant is also an important source of food and so it also makes sense that it is placed here in El Centro de la Raza’s Cocina Popular. Quetzalcoatl, because of its two identities (bird and serpent), is often depicted representing the idea of duality and harmony between opposites. This mural is divided between left and right into scenes of night and day and between top and bottom into scenes of the earth and the skies.

Salvador Allende was the president of Chile from 1970-1973. As an openly socialist president of Chile he instituted a variety of reforms to public education, housing and health programs and transferred many private industries into state ownership. Although these policies benefitted many working class Chileans, there were those who wanted to oust what they saw as a dangerous, communist president. On September 11, 1973, a U.S. backed coup overthrew and assassinated Salvador Allende. The new regime lead by Augusto Pinochet carried out harsh punishments of former Allende supporters, including many artists and leftist intellectuals. In the late 1970s, these Chileans fled to the United States to escape the repression. The refugees ended up in Seattle and at El Centro de la Raza in the early years of the organization. The Chileans brought with them a valuable political consciousness and were influential in the formation of El Centro de la Raza’s 12 principles. These principles, developed in 1976, help guide the vision and mission our organization to this day. We have named Room 106 “Sala Salvador Allende” to honor the memory of this inspiring leader who, during his presidency worked to improve the lives of poor Chileans. This room also honors the entire Chilean community and their support of El Centro de la Raza.

This bright and beautiful mural is the perfect welcome to El Centro de la Raza’s José Martí Child Development Center. Uxmal, a Guatemalan artist, painted this mural to thank El Centro de la Raza for supporting her upon her arrival in the United States.

The colorful animals and plants are engaging to the children of our Child Development Center. They speak to the values of environmental and cultural diversity.

Cultural preservation was an important concern for the namesake of the Child Development Center, José Martí (1853-1895). José Martí, a Cuban national hero, spoke against the damaging impact of Spanish colonialism in his homeland of Cuba and talked about the importance of maintaining cultural diversity.

Scattered among the animals one can also find names of past employees and volunteers of El Centro de la Raza. For example, on the far left of the mural, there is the name “Roberto” written above a small bird that doesn’t quite fit in with the other tropical creatures. This was Uxmal’s tribute to El Centro de la Raza’s longtime Executive Director Roberto Maestas. He is depicted here as a roadrunner, the state bird of his home state of New Mexico.

Children and youth have been an important focus of El Centro de la Raza throughout its history. Included in El Centro de la Raza’s 12 guiding principles is the goal to “respect and recognize the rights of children as full and privileged members of our society”. In fact the Jose Marti Child Development Center was one of the very first programs here at El Centro de la Raza. Back when the organization was a humble class of ESL students, they began to realize the need for enriching, bilingual childcare for their children. These students came together and created a childcare program that met the needs of both the parents and the children.

Jose Marti, the namesake of our Child Development Center, was an inspiring figure in Cuban history who exemplifies the vision of El Centro de la Raza. In the early years of El Centro de la Raza, many members of the staff were able to visit Cuba and learn more about the impact of Jose Marti on the Cuba people. Born in 1853, he used his talents as a poet and journalist to speak out against the injustices of Spanish colonial control of Cuba. Because of his activist writing was jailed and finally exiled to Spain.  Still he continued to publish his passionate poems, essays and articles as he traveled to Mexico, Guatemala and New York. He returned to his home country to fight in the early battles for independence from Spain in 1895. Tragically he was killed in battle but his legacy lives on in Cuba and here at El Centro de la Raza. As Jose Marti said, “we work for children because it is they who know how to love, because it is children who are the hope for the world.”