Our History, Our Community

The children of the El Centro de la Raza, Jose Marti Child Development Center’s After-School Program have chosen to dedicate their new classroom to Luis Alfonso Velasquez Flores, a Nicaraguan youth who organized the Elementary Student Movement (MEP) and became the voice for the “Rights of Children”. On April 27th he was ambushed and brutally assassinated by the Somoza Guardia Nacional (National Guard), he died from his injuries five days later on May 2nd – three months before his tenth birthday.

Luis’ message of… SOLIDARITY, SELF-ASSURANCE, SELF-WORTH, COMMUNITY INVOLVEMENT, SOCIAL EQUALITY, EQUAL OPPORTUNITY, FAIRNESS, CAMARADERIE and HOPE for all children is his legacy. His life continues to inspire not only the children of this program, but also organizations and schools throughout the world established to continue his work advocating for the “Rights of Children”. 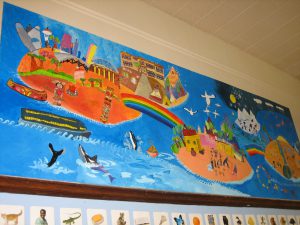 Created in collaboration with an Arts Corps program, this mural project was led by the Cuban sculptor Tomas Oliva, Jr. and painted by the children of the after school program. The mural shows a variety of different continents and cultures all connected by rainbows. On the left is a scene of the Puget Sound region which includes the Seattle skyline, a ferry, imagery of indigenous culture and even El Centro de la Raza in the background. The mural also highlights the variety of animals in our world and serves as a reminder of the importance of treasuring our planet’s ecological diversity. 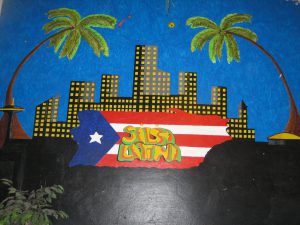 This mural represents “orgullo puertorriqueño” (Puerto Rican pride) and pays tribute to Puerto Rican activism, in particular the continued struggle for independence and greater autonomy for the current Commonwealth of the United States. These issues were of particular importance to El Centro de la Raza during the 70s and 80s. For this reason, certain members of the El Centro de la Raza community have had the opportunity to travel to the island to support social justice efforts and participate in events.

The imagery of the mural implies the connection between Seattle and Puerto Rico. The palm trees and flag are clearly images of Puerto Rico. However, while the city skyline looks generic at first glance, there are two buildings that reveal the true location: the Space Needle on the far left and the Kingdome (demolished in 2000) on the far right. At the top of the mural is a small image of the Earth which represents the connection between all nations and aligns with the international consciousness that is an integral part of El Centro de la Raza’s values. 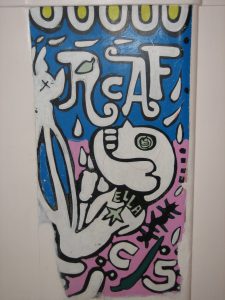 Founded in 1969 and based in Sacramento, the artist collective known as the Royal Chicano Air Force (RCAF) was created to express the goals of the Chicano civil rights and labor organizing movements.  The founders’ intent was to provide artistic, cultural, and educational programs as well as events for the public. They also created a bilingual and bicultural arts center where artists and the broader Chicano community could gather to exchange ideas, and find support. The collective was tied in many ways to the Chicano movement and the farmworkers movement.

Esteban Villa, one of the founding artists of the RCAF, created this mural that is dense with Chicano imagery and symbolism. The Día de los Muertos skeleton with the cross on its hand is a popular sign of the resistance during the Pachuco/Zoot Suit Movement of the 1930s-40s. “Ella” tattooed on his arm refers to the popular romantic song of the same name made popular by José Alfredo Jiménez. The chile at the bottom is a traditional symbol of Chicano culture and the letters “C” and “S” separated by the chile as a slash stands for “Con Safos.”

Con Safos (C/S) when used in graffiti or mural art is similar to the use of an unofficial copyright symbol (©). It protects the art and demands respect from fellow artists who might be thinking of tagging or covering up the artwork. 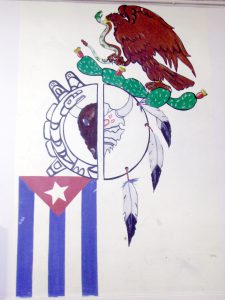 This mural includes imagery of three groups: Mexican, Native American, and Cuban people. The eagle perched on a cactus with a snake in its talons is the symbol of the legendary founding of Tenochtitlan (present-day Mexico City).  According to legend, the gods advised the Aztecs that the place they should establish their city would be identified when they saw an eagle perched on a prickly pear tree devouring a serpent, The circular image divided into two halves represents solidarity between the cultures of the many Plains Indian tribes (left) and the Northwest Indian tribes (right). This was the symbol of the former agency Survival of American Indians Association (SAIA). Finally, the flag is that of Cuba.

The artist visually places these symbols of seemingly unrelated communities together to allow the viewer to contemplate their similarities, in particular their similar struggles. The Aztecs were famously enslaved and massacred by the conquistadors and the legacy of the conquest is still present. Similarly, the Native Americans faced genocide upon the arrival of Europeans to the continent and continue to experience oppression. Finally, Cuba has been the subject of colonization by both Europe and the United States and with the current status of the embargo, continues to suffer the political and economic consequences. These three groups also represent three of the communities with which El Centro de la Raza is engaged to support liberation and self-determination movements.

This mural is dense with symbols of the values of El Centro de la Raza. As our main mural, it welcomes visitors new and old to our building. Starting on the left, DeSiga painted an underwater scene of tranquil whales and dolphins. This imagery represents the artist’s environmentalist views. The underwater pyramid represents the process of discovering one’s identity. A key part of the Chicano movement is the process of recapturing a history that has been hidden, like the pyramid beneath the waves. Similarly, the image of the mother represents the importance of honoring motherhood, origins and traditions.

Above the door, there is a global cornucopia of fruits and vegetables. The green chiles on the left of the door, called ristras, are shown in red on the right as they dry. The chiles are a tribute to Roberto Maestas, one of the principal founders and longtime executive director of El Centro de la Raza because they are a tradition from New Mexico, his home state. In the center is a red plaque with Chinese characters which when translated mean “peace, prosperity and happiness”. This honors to the Asian community that lives in the Beacon Hill neighborhood.  Further along to the right is an emblem of four circles within a larger circle- the emblem of the Minority Executive Director’s Coalition of King County. This coalition represents four communities of color: African-American, Latino, Asian Pacific American, and Native American people who, with the strength of multiracial unity, enabled the founding of El Centro de la Raza.

The right side of the mural highlights the struggle of farmworkers. Standing upright in the fields is a long handled hoe. Long handled hoes were as a symbol of relief for farmworkers who for a long time were forced to use cortitos, short-handled hoes. The shorter handles forced workers to bend over and crouch uncomfortably to do their work and often led to permanent back injuries. The farmworkers are shown laboring alongside the symbols of the two major farm worker unions founded in the 1960s: the United Farm Workers of America (UFWA) founded in California and the Farm Labor Organizing Committee (FLOC) from Ohio. These emblems are blocking the wheels of the menacing tractors to symbolize how organizing efforts have helped to protect the farmworkers from unjust labor practices.

Finally, perhaps one of the most striking elements of the mural are the two large faces that dominate the two upper corners. Originally these faces were intended to depict male warriors, however, when the artist returned to complete the mural in 1997, he altered these faces to appear more feminine. This was an effort to recognize the important role women have played throughout the history of El Centro de la Raza. In addition to the mural, you can read about the artist, Daniel DeSiga here. 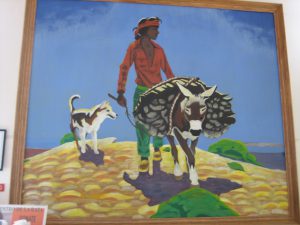 This mural by Mario Parra depicts a young Pueblo Indian boy with a burro and a dog. Parra was involved in the early years of activism with El Centro de la Raza throughout the 1970s. As a talented painter and muralist, he wanted to contribute his artistic talents to El Centro de la Raza. He consulted Roberto Maestas for ideas of what to paint and Roberto produced a postcard that reminded him of his childhood. The imagery of the postcard served as the inspiration for the mural.

The frame surrounding the original mural was added after the death of Mario Parra. His daughter contacted El Centro de la Raza and requested a frame be added to the mural as well as the photograph and information about her father, now seen to the left of the mural. This serves to memorialize his life and work.

This small mural was painted as a copy of the symbol of the Leonard Peltier Defense Committee. The committee previously had its offices in El Centro de la Raza. This mural depicts the head of a Native American person merging with the head of an eagle. Leonard Peltier was famously arrested and convicted for the murder of two FBI agents in 1975 on the Pine Ridge Indian Reservation in South Dakota. The suspicious legal proceedings of Peltier’s case are now viewed by many as one example of the corruption, incompetency, and racism in the U.S. criminal-justice system. Peltier is currently the longest held U.S. political prisoner and there have been a series of efforts to grant him clemency as many believe him to be innocent. 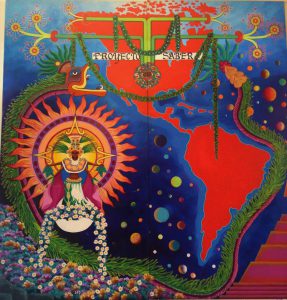 This mural was painted by the Proyecto Saber students of Chief Sealth High School with the help and guidance of Victor Ayotl, a Mexican artist and an expert on ancient Mesoamerican cultures. Proyecto Saber is a program in select Seattle Public Schools that provides bilingual/bicultural support, curriculum, and service opportunities to students and has a long history of collaboration with El Centro de la Raza.

In the center of the image of North America is the central image of the Aztec calendar known as Quinto Sol. (This symbol also serves as the logo for the Proyecto Saber program.) The moons and planets in the background represent the Aztec reverence of the cosmos. The feathered serpent encircling the mural is the important Aztec deity of Quetzalcoatl. Quetzalcoatl’s name comes from the Nauatl word quetzal, a bird with vibrant feathers, and coatl which means snake. Below Quetzalcoatl is the Aztec goddess that preceded the Virgin of Guadalupe and represents the embodiment of mother earth.